That was precisely the objective of the 2020 UREZPAPA innovation project, an initiative with participation from NEIKER, the UDAPA co-op (project lead), the UAGA union and the GARLAN co-op. Its research proved that water use in potato farming can be streamlined with a small reduction in the watering interval.

According to Gorka Landeras, the NEIKER manager on the project, “We’ve determined that going from watering every 10 days (32 mm) – the usual interval for areas in the study – to every 6-8 days up to field capacity would reduce production losses by half with a small increase the volume of water used”.

Thus, as the NEIKER researcher put it, compared to the strategy of conventional watering, “reducing the watering interval by that number of days would entail yield capacity losses between 15% and 10%, compared to the 25% loss associated with traditional water management”. However, “the volume of irrigation water would be increased, although not excessively” (30 litres per square metre more in the case of watering every 7 days compared to the conventional method).

To carry out this research, we used soil humidity sensors and computer tools using soil-water balance models on two pilot potato fields located in Elburgo and Foronda, both in Araba.

So, this project worked with precision sensor and digital tools – namely, the application URA – allowing the watering frequencies used today to be compared to others with reduced water usage, thus minimising productivity losses.

The Elburgo field, on the one hand, compared the watering recommendations given by the humidity probes with those from the URA application. To do that, the field was divided in two and each part was watered according to each tool’s recommendations. “This comparison made it possible to improve watering efficiency in the selected areas and no differences were found between the two strategies”.

At the Foronda farm, on the other hand, a watering simulation had intervals between 4 and 10 days to determine which frequency was best. 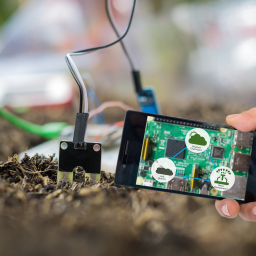