Farmers and specialists in the sector came to visit the seven hectares of farmland that we dedicate in NEIKER to ecological agriculture at our farm in Arkaute to see first-hand the testing done on organic crops and the results obtained. This initiative was developed within the framework of the Ecological Production Enhancement Plan (FOPE), led by the Department of Economic Development, Sustainability and Environment of the Basque Government and spearheaded by NEIKER and the Organic Agriculture and Food Council of the Basque Country.

Implemented in 2014, the plan has the overall goal of increasing ecological production and developing the associated transformation and commercialisation chain. Increasing the number of operators, transformers, boosting local consumption and expanding the surface area and profitability of ecological production are a few of its medium and long-term goals.

The new issues presented at the test field in Arkaute underscored the development of crops for next fall, some of the test results from previous campaigns and the proposals for tests on autumn crops for the next campaign. Specifically, the results of testing done on ecologically-cultivated wheat, broad beans, oats, and fodder were presented. “We will continue assessing the data of the tests we do so as to make them available to the ecological production sector”, NEIKER specialist and ecological agriculture expert Roberto Ruiz de Arcaute said.

In the last year, the surface area of registered ecological farmland in the Basque Country amounted to 6,789 hectares, i.e., 3,915 hectares more than in 2014. According to the Council’s sources, this shift, “notably includes the expansion of surface area dedicated to grazing grass, pasture and fodder, as well as wine grapes and fruit, which have practically doubled in the last five years”.

Bittor Oroz, vice minister of Agriculture, Fishing and Food Policy for the Basque government, expressed the regional government’s appreciation for how much effort the sector has put in to make ecological farming a viable alternative. “The Basque government is readily aware of the effort entailed for the sector to commit to ecological farming and we think it has done a stellar job involving itself to increase the surface area dedicated to this kind of production”. According to Oroz, “ecological farming offers added value compared to traditional farming and responds to society’s needs, as it increasingly demands more of these kinds of foods”. The vice minister also explained that the annual visits to NEIKER farms “are important for farmers so they can see the extensive farming practices developed here first-hand and take part in these advances, ask questions, and share their experiences”.

A strong commitment to ecological production

In NEIKER we also just began the process of converting a number of hectares of the Gauna farm to ecological farming. According to Ruiz de Arcaute, “if this process goes well, the land will be able to be certified three months after the conversion period”. At that point, nearly 25% of NEIKER’s experimental farm will be certified ecological, in line with the European Farm to Fork initiative. The certified surface area will not only be used to assess new crops and products, but also especially for rotation itineraries, a key to the success of this kind of farming, adapting them to the conditions imposed by climate change.

The open house at our ecological testing fields held twice per year at the Arkaute farm offers farmers the opportunity to learn everything they need to convert their land to ecological farmland and allows them to network with others in the sector. 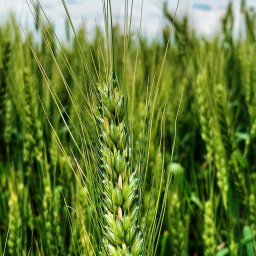