Walnut trees and hops, an opportunity for crop diversification in Basque agriculture

In recent years, the primary sector has had to adapt to new consumer tastes. For example, there has been an increase in demand for nuts and dried fruit, which is growing by around 5% a year in the Basque Country. However, only 20% of what is consumed is produced in the Basque Autonomous Community, which opens the door to the production and marketing of fruits such as nuts throughout the territory. The consumption of craft beer is also increasing. This drink uses a greater quantity of hops in its brewing process than industrial beer and, in addition, it values both the type of hops used and their origin.

In this scenario, NEIKER, in collaboration with the Rural Development Association ADR Añana, the Provincial Council of Alava and the HAZI Foundation, has organised a technical visit with the aim of showing the potential for the primary sector of the cultivation of nut trees, mainly walnut trees, and the production of hops.

The Basque Government’s director of Agriculture and Livestock, Jorge Garbisu, stressed during the field trip that “crop diversification and opening up to new markets form part of the Basque Government’s strategic axis to help the primary sector to adjust to the new circumstances, also favouring the local production of foods that, to date, have not been grown in the Basque Country or which still have a low presence”.

The event took place today in the experimental farms of Zambrana and Berantevilla and was attended by farmers, technicians and producers interested in the possibilities offered by the introduction of this type of crop. The results of the trials were presented, as well as information on how the crops were installed and the agronomic management carried out.

In the case of the hops trial, this will be the sixth growing season in which the technology centre will participate in order to evaluate the adaptation of different varieties of hops to the conditions in Alava. Thus, since 2017, six varieties of hops (NUGGET, MAGNUM, PERLE, CASCADE, SPALT and SAAZ) have been planted at the experimental farm in Berantevilla and the results obtained so far are different depending on the variety. “Some of them are performing better and have an annual stability that makes them interesting for the conditions in which they are grown”, says Roberto Perez-Parmo, a technician from NEIKER’s Plant Production and Protection department.

Walnut trees about to enter the production phase

After visiting the experimental hop plot, the attendees had the opportunity to join an informative session on pests and diseases affecting walnut trees in Zambrana. The visitors were able to observe some of the diseases present in this type of crop and how to treat them. “We must bear in mind that the purpose of this experimental field is to test the technical viability of the crop, while at the same time being a training resource for future walnut growers”, explains Amaia Ortiz, head of NEIKER’s Plant Production and Protection Department. Aspects of agronomic management such as irrigation, fertilisation, phytosanitary treatments and pruning have also been explained, and the different evolution of the three varieties of walnut trees under study has been verified, as well as the effect of the pruning systems used.

Although there are other nut trees in Zambrana, on this occasion the training focused on walnut cultivation because they are about to enter an initial production phase. In fact, it is expected that by next year they could be at around 15% of their potential. 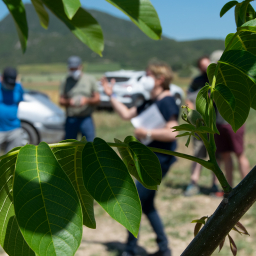